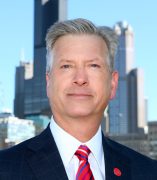 Neal R. McCrillis was named UIC’s Vice Provost for Global Engagement effective March 1, 2017. Prior to joining UIC, he was the Mildred Miller Fort Foundation Eminent Scholar Chair of International Education, Executive Director of the Center for International Education, and Associate Professor of History at Columbus State University in Columbus, Georgia.

Dr. McCrillis received his B.A. from Vanderbilt University, and his M.A. and Ph.D. from UIC. He is a scholar of British and twentieth-century European history and the author of The British Conservative Party in the Age of Universal Suffrage (Ohio State University Press, 1998), along with numerous articles. His current research focuses on the British response to the United States during World War I.